Show season has started in Denmark with international show in Odense mid February.

Fister and Sputnik was entered  Sputnik was not this judges cup of tea and though Fister won the champion class with excellent he was to be beaten by no other than his young son Yepper who took BOB and group #4 (in a very though group lineup). BOS was also a Fister child  Whoobee and she gained her last CAC for the Danish Championship title .. I was so proud - Huge congratulations to Heidi and even more to Jesper as Whobee is his special little star (no wonder why) !!

... Now with Yepper and Yingle out of puppy class I had the possibility to enter a progeny class after Fister, and we got Best in Show #2  thanks a million to Heidi, Jesper and Henrik

The national Easter show in Naestved was once again a busy weekend  and with great results  Fister got BOS and Sputnik took the CAC  and Fisters progeny class simply went Best in Show !! BOB and group #3 was Taymyrs Twisted Sister (mother of Yepper & Yingle)  Congratulations Heidi & Jesper 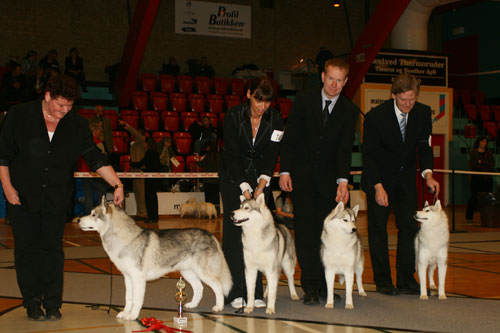 Taymyrs Special Effect - progenyclass with Hay Je Ho Yepper Depper, Taymyrs Who The beep is Alice and Hay Je Ho Yingle Belle and last but not least Heidi, Jesper and Henrik. Thanks again to you - is this starting to be fun or what .... 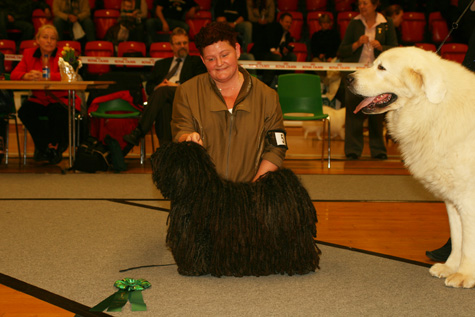 This year startet out with a very muddy day at the oldfashioned museum village Andelslandsbyen. Besides mud this day offered some show sledding and some fun times with my doggie family  both two and four legged. Pictures from "Andelslandsbyen 2007" can be found under Snapshots.

The first Danish Kennel Klub Show 2007 in Odense in February - Fister (Taymyrs Special Effect) won best male and beaten to best of breed by no other than his beautiful daughter Taymyrs Who the beep is Alice. 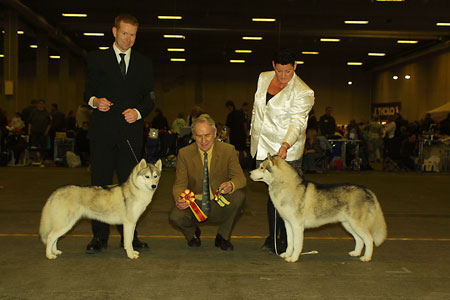 BOB and BOS in Odense - pictured by Heidi Taymyr Holm

April offered a trip to Leuwarden in the Nederlands  Foo'E (Taymyrs Valid 'foo' Element) won best bitch and completed her international championship. And Fister won Best of Breed  and with that he finished his Deutch champion title + he vent Best in Group and Best in Show #6. Our very best Puli friend Jesper was travelling with us  as usual :-) And way to go  his Bubbleton Birthday Bandit went BIS #5.

In May at the annual unofficial show Bakkeskuet I was as always this time of year occupied with work. BUT Jesper and Heidi worked wonders with there two Fister babies. Jesper and Whoobee (Taymyrs Who the beep is Alice) vent Best in Show while Heidi and Yepper (Hay Je Ho Yepper Depper) vent Best in Show Puppy. I was told they had a fantastic day though it rained cats and dogs  So proud I was !! 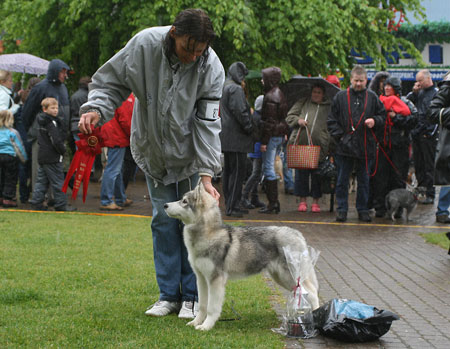 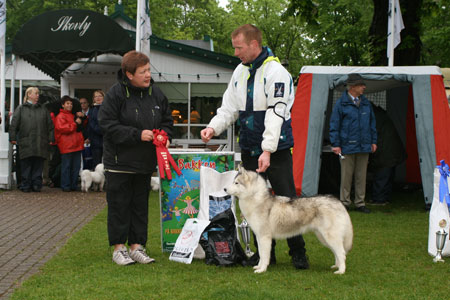 
At The DKK international show in Ballerup in june Fister (Taymyrs Special Effect) had yet another marvellous day he took best of breed and group #3. 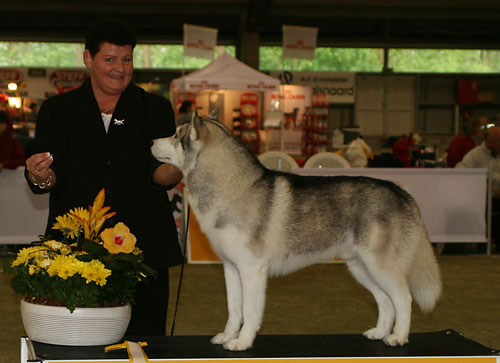 Once again we vent on tour with Jesper and this time Klaus too in the end of June / start July. The Swedish island Gotland was worth a visit with a double show and the option for a few days af vacation. The shows vent excellent for Fister (Taymyrs Special Effect) who won Best of Breed and Group #4 both days. 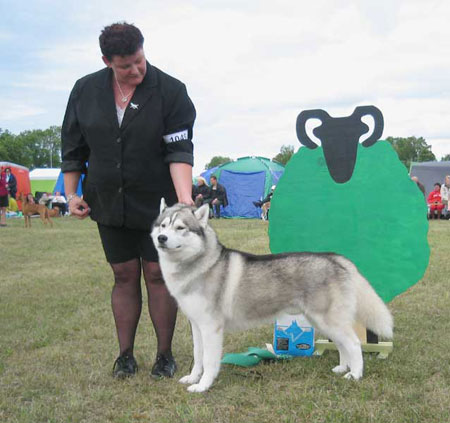 The Danish Kennel Club Anniversary show in Mid August  Brought some very special judging. But never the less I was proud of my little Australian guy - Sputnik (Suthanlites Inner Music) won Best Opposite Sex and the title Anniversarywinner 2007. 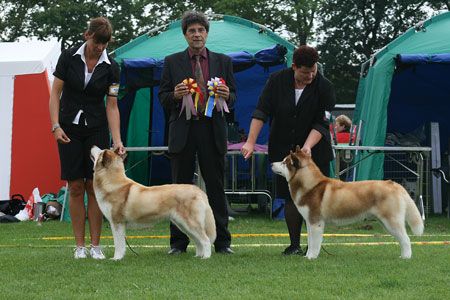 At the first day of September Luxembourg international show was the destination - And with great results Sputnik (Suthanlites Inner Music) won runner up in open class and Fister won Best of Breed  with that he gained the title Luxembourg champion.

Next week the Swedish national show in the beautiful castle Sofiero was another success. I was been trusted to bring Whoobee (Taymyrs Who the beep is Alice) and she was a sweetheart  completely out of coat she vent best bitch #2 with CAC. Thanks Jesper and Heidi for letting me have this wonderful day with the granddaughter !! Fister (Taymyrs Special Effect) took Best of Breed and Group #4.

One week later the success will never end The prestigious Danish Copenhagen International Winnershow was entered and I must say with the most nervous mind I showed Fister and FooE and with great help from my friend Futte who took excellent care of Sputnik. But no reason to worry - the results came in fantastically. Fister won Best of Breed with the title Copenhagenwinner 2007, Sputnik took best male #3 with CAC and FooE got 4th best female. Congratulation to Henrik who got Best Opposite Sex and Copenhagenwinner 2007 to his Quennie daughter Taymyrs Top of the Pups. And the youngsters Hay Je Ho Yepper Depper and Hay Je Ho Yingle Bell took BOB and BOS puppy Thank you to all our friends who came to ringside to back us up, only real friends shows up like that !! 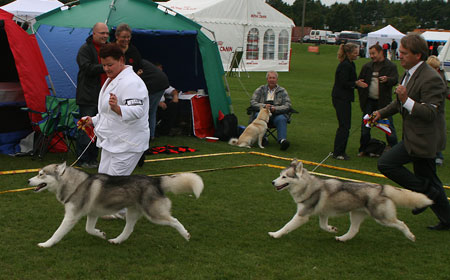 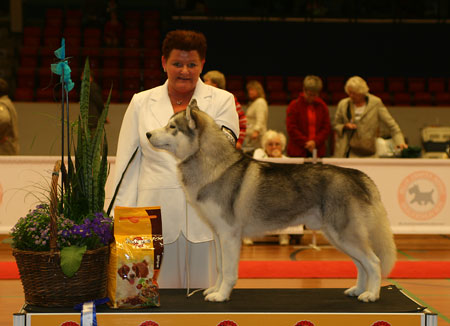 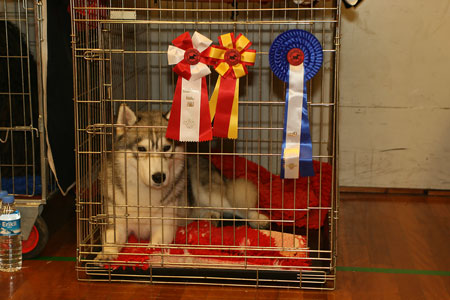 Mid october Yingle was old enough to show outside the puppyclass. Henrik and Anne brought her to the international show in Rostock. Once again a very proud granma can report some fine result for her youngsters. Hay Je Ho Yingle Bell won the title Rostock Jugendsieger 2007 !!

My last showing this year was to be in DKK international yearfinishing show in Herning Fister took Best of Breed and with that he cemented the fact  HE IS THE MOST WINNING SIBERIAN HUSKY IN DANMARK THIS YEAR and he took the prestigeuos title DKKRV07. Would like to mention that runner up to the title is his beautiful daughter Whoobee. And thank you Jesper Holm for a fair and fun fight during 2007 :-) Sorry Heidi if we have been a bit unbearable, but we had fun !! 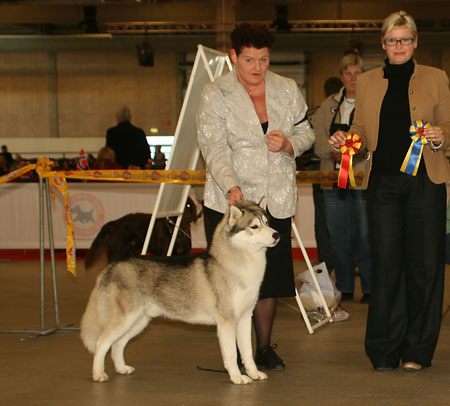 Now Jesper and Heidi hadnt had enough of showing yet The went to the international Nordic Winner Show in Stockholm, Sweden in mid December. Fister too hadnt had enough so he went along too. Thank you Heidi for showing Fister, and for doing it so perfectly !! While I was busy at work the most fantastic result just came running in at my cell Fister won Best of Breed and the Nordicwinner 2007 title. Quennies daughter Twister (Taymyrs Twisted Sister), owned by Jesper and Heidi went Best Opposite Sex and the title Nordicwinner 2007. The children after Fister and Twister Yepper and Yingle both won the Junior Nordicwinner 2007 titles 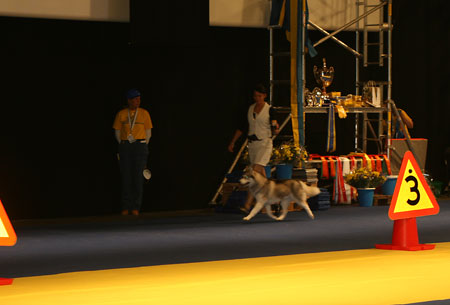 Taymyrs Special Effect in the mainring at Stockholm .... the theme this year was "Building up for the World Dog Show 2008" - pictured by Jesper Holm

What a year this has been . 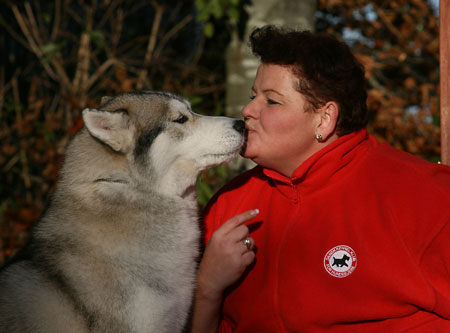 Fister had a fantastic year 2006. Some highlights was winning BEST IN SHOW #2 at an all breed show in the Netherlands, ending the year in Denmark with breedwinning title DKKRV06 and going group 1st.

Foo'E and Fisters pages has been updated with "Offspring"